$4.5 Million Settlement for Child Injured due to Overventilation and Hypocarbia

The cerebral palsy attorneys at ABC Law Centers secured a $4.5 million settlement for a child injured by ventilation mistakes in the NICU.

In this case, the mother, who was 16 years old at the time she went into labor, began having contractions at 29½ weeks gestation. At the hospital, the baby was found in breech position and an emergency C-section was performed. After delivery, the baby was transferred to a hospital with a neonatal intensive care unit (NICU) and put on ventilation, as his lungs had not fully developed. He was also given medication to improve his lungs’ capacity to utilize oxygen.

The baby suffered from both hypocarbia (decreased carbon dioxide in the blood) and hypotension (low blood pressure) during the first few days of his neonatal stay. Both of these conditions can decrease the blood flow to the cerebrum.

Medical personnel in the NICU failed to appropriately decrease the baby’s ventilation as his lungs matured and were better able to utilize oxygen on their own. They did not monitor his blood gas readings and the baby was overventilated. 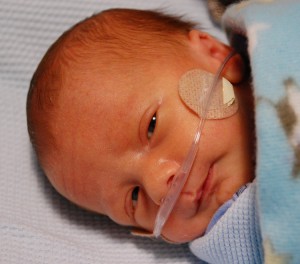 On his seventh day in the NICU, a head ultrasound showed echoes in the white matter of the brain. Subsequent ultrasounds, performed on the 17th and 28th days of life, showed cystic changes in the brain and a Swiss cheese-like appearance, with cysts and softened brain tissue. Experts for the case all agreed that this was caused by decreased cerebral blood flow. As a result of the decreased blood flow to his brain and the subsequent brain damage, the baby was diagnosed with spastic quadriplegic cerebral palsy. Because of his physical and cognitive impairments, he will we require a wheelchair and constant care for the rest of his life.

Blood and urine cultures performed for both the mother and baby were negative for infection, but many of the defense experts argued that the baby had clinical sepsis. Though the defense argued that the standard of care was met and maintained that the brain injury was the result of an inflammatory response to an infection passed from the mother to the baby, the matter settled for $4.5 million.

If your child was overventilated during their neonatal stay, or suffered another birth injury due to the negligence of medical personnel, contact the award-winning lawyers at Reiter & Walsh ABC Law Centers. Our attorneys have over 30 years of experience working on birth injury cases, including hypoxic ischemic encephalopathy (HIE) and cerebral palsy cases.  Email or call Reiter & Walsh ABC Law Centers at 888-419-2229 for a free case evaluation. You can also press the Live Chat tab on the left of your browser screen or complete our quick online contact form.