Are Birth Injuries Likelier to Occur at Smaller Hospitals?

Research shows that bigger hospitals offer better care than smaller hospitals and patients in low income areas are more susceptible to medical negligence.  Gaps in care significantly impact pregnant women:  Women who give birth in hospitals labeled by researchers as being “low-performing” have a much higher chance of experiencing birth injuries and other complications than women who use “high-performing” hospitals for labor and delivery.

WHAT THE RESEARCH SHOWS ABOUT MEDICAL MALPRACTICE & BIRTH INJURIES

The following factors are associated with medical errors:

The first four factors are magnified at military hospitals, and the New York Times just published an article uncovering the risky practices of these hospitals (completely separate from the crises occurring at VA hospitals).  In fact, the NYT obtained an internal Pentagon document that discusses a plan to convert many small and underused military hospitals into birthing centers or outpatient clinics.

Converting low-performing hospitals into birthing facilities is indeed a frightening thought, especially since military hospitals are already under fire for negligent practices in their labor and delivery units.  An obstetrician who resigned from his position at a military hospital because he felt the hospital had a “culture of complacency” told the NYT that lab results at the facility could not be trusted, physicians’ pagers didn’t work, and incompetent nurses were assigned to monitor the fetal heartbeat monitors.  This obstetrician tried to bring attention to the large amount of errors occurring at the hospital, but he was essentially told to mind his own business and was then ordered to apologize in writing to the entire staff.

Ignoring negligent labor and delivery practices is very troubling.  Approximately 50,000 babies are delivered every year in military hospitals, and there have been some very shocking cases of labor and delivery negligence that caused serious birth injuries and even death of some of the newborns.

In one tragic case, the wife of a sergeant, April, had a pregnancy labeled high-risk and went in for a check-up.  Her baby was immediately placed on a fetal heart rate monitor, but nurses lost track of the baby’s heart rate for over an hour.  No physician was present at this time and nobody was aware that the baby was in distress.  When the head of obstetrics (a physician who had completed his residency 5 months earlier) finally recognized the problem, he decided to transfer the mother and baby to a civilian hospital.  Recognition of the baby’s distress came far too late; the baby girl died before the transfer could take place.

Two weeks later, in a meeting with the hospital commander, April’s husband demanded to know why his wife’s obstetrician had not performed an emergency C-section the instant his baby’s distress was recognized.  Shockingly, the obstetrician said, “If we tried to do a C-section for every baby that went into distress, there would be no babies delivered vaginally.”  The government settled April’s malpractice claim for $250,000.00.

There have been numerous claims settled by the government in recent times.  Mothers are experiencing permanent injuries due to negligent management of maternal hemorrhages caused by complications such as placental abruption and uterine rupture.  Very young children are dying, including a little boy who would not stop vomiting and was repeatedly sent home and told to drink Gatorade.  Shortly after being sent home the last time, the 6 year old died due to severe dehydration caused by a problem with his stomach.  A Stanford University specialist who reviewed the boy’s record from the military hospital found that mistakes in his care directly led to his death.  The government paid $250,000.00 for malpractice, the maximum allowed by California law.

Recent studies regarding hospital negligence throughout the U.S. is not promising.  Approximately 440,000 deaths occur every year as a result of preventable medical errors, and millions of people survive these errors but are left with severe injuries.  Research also shows that physicians seldom report other physicians’ errors, and state medical boards almost never take any action against physicians who have had hospital or clinical privileges removed due to negligent behavior.  Few hospitals are implementing policies to correct the epidemic of preventable medical errors, and when testifying in front of a Senate Subcommittee, a Harvard professor told the panel that hospitals are no safer now than they were 15 years ago.

Indeed, a hospital stay can be dangerous.  It is important to carefully choose a hospital and physician.  Sadly, military personnel often don’t have a choice.  Members in active duty are required to use military hospitals unless the military hospital does not offer the needed procedure.  Recently, the military has ordered tens of thousands of military beneficiaries who are using civilian services to switch to a primary care physician at a military hospital.  If these servicemen and their family members don’t switch, they will have to pay a lot more out of pocket for insurance that covers civilian care.

Many military service people do not have a choice of where to receive medical care, and many cannot afford the expenses associated with visiting civilian hospitals and clinics.  It is important to be part of the lobbying effort that advocates for eliminating the military hospital system and allowing patients to choose which hospital they wish to utilize.  Physicians that had government support for medical school should be able to find training in hospitals throughout the country and not just at underused military hospitals.

In the meantime, people should fully evaluate potential military physicians, and this is especially important for expecting mothers who are at a high risk of suffering harm at a military hospital.

Listed below steps everyone can take to help ensure a safe hospital stay.

Tips for Staying Safe in a Hospital

If the patient is not fully awake and aware of her surroundings, it is a good idea to have someone sitting next to her as often as possible.  In fact, a patient sitter is always a good idea.  The sitter can help implement the steps above.  When choosing a hospital, make sure the facility will allow a patient sitter to be present at all times.  Patient sitters can ensure that caregivers wash their hands, don’t pull on devices that can pull out lines that are in or on the patient’s body, and thoroughly read the chart of the patient.  Lack of hand-washing and failure to read a patient’s chart (especially after a shift change) are well documented causes of preventable harm to a patient.

Patients must remember that they are in charge.  They have a right to read their charts and medical records at any time, and people given permission by the patient also may read the records.  If a patient wants a patient sitter, she has the right to have one.  Hospitals may make this difficult, especially during non-visiting hours, which is why it is important to discuss this with the medical center before admission.  Patients should feel free to ask as many questions as they want.  For example, it is important to ask the treating physician or staff member performing a procedure how many times she has performed the particular procedure, test, or surgery.

Tips for Staying Safe During Labor and Delivery

As can be seen by the McLean case, the ability to perform a prompt C-section if the baby becomes distressed is crucial.  In addition to this, astute fetal monitoring must take place so that distress is recognized the instant it occurs.  This means that personnel skilled at fetal heart tracing interpretation must be present at all times.  The staff cannot simply rely on the monitors’ alarms because these often fail or go unheard.

When a baby is in distress, which is signified by a non-reassuring heart tracing, it means she is experiencing oxygen deprivation.  A prompt delivery must take place – usually by C-section – in order to avoid permanent brain damage. When babies experience a lack of oxygen to the brain for too long, they can develop a form of brain damage called hypoxic ischemic encephalopathy (HIE), which often leads to cerebral palsy, seizures, developmental delays, intellectual disabilities and periventricular leukomalacia (PVL).

Listed below are some questions that mothers should ask potential obstetricians.

Conditions that can cause distress and birth injuries include the following:

When labor and delivery are not properly managed, a baby can develop brain bleeds and become severely oxygen deprived.  Babies can end up with cerebral palsy, hypoxic ischemic enecephalopathy (HIE), periventricular leukomalacia (PVL), intellectual and developmental disabilities, seizure disorders, and hydrocephalus.  Babies can also become brain damaged if an infection in the mother is not properly managed and it travels to the baby’s brain after birth. 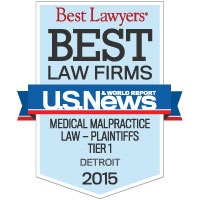 If your child was diagnosed with a birth injury, such as cerebral palsy, a seizure disorder or hypoxic ischemic encephalopathy (HIE), the award-winning birth injury lawyers at ABC Law Centers can help.  We have helped children throughout the country obtain compensation for lifelong treatment, therapy and a secure future, and we give personal attention to each child and family we represent. Our nationally recognized birth injury firm has numerous multi-million dollar verdicts and settlements that attest to our success and no fees are ever paid to our firm until we win your case.  Email or call Reiter & Walsh ABC Law Centers at 888-419-2229 for a free case evaluation.  Our firm’s award-winning birth injury lawyers are available 24 / 7 to speak with you.

Seizure treatments and a new FDA approved device that can prevent seizure activity
Medical errors in labor and delivery
$3.85 Million For Baby With Cerebral Palsy After Physicians Failed To Respond To IUGR And Other Signs…
Sunshine Foundation Sends a Boy with Cerebral Palsy to Disneyland
Medical mistakes are the third leading cause of death in The U.S., behind heart disease and cancer
Delayed C-section and nuchal cord cause hypoxic ischemic encephalopathy (HIE)
0 replies

CONTACT us
Preventing Hypoxic Ischemic Encephalopathy (HIE) and Cerebral Palsy Group B Strep (GBS) is the Leading Cause of Sepsis & Meningitis in a Newborn...