When a baby is in a breech presentation, which means her feet or buttocks are positioned to exit the birth canal first, a C-section is the safest way to deliver her, and in most types of breech positions, a C-section delivery is required.  A breech presentation puts the baby at risk of having numerous problems, including a compressed umbilical cord, head trauma, brain bleeds, birth asphyxia and conditions such as hypoxic ischemic encephalopathy (HIE), seizures and cerebral palsy.

A family from New Zealand recently experienced a tragedy when their physician failed to explain to them the risks of vaginally delivering their little boy who was in a breech presentation.  The physician had a difficult time delivering the baby and the infant’s head was stuck in the birth canal for five minutes, compressing his umbilical cord.  When he was finally born, he was limp and not breathing.  The newborn required resuscitation, but no neonatal specialist was present.  Two minutes elapsed before the specialist arrived to resuscitate the baby, but by then it was too late.  The baby suffered severe brain injury and was soon diagnosed with severe hypoxic ischemic encephalopathy (HIE), cerebral palsy and a seizure disorder.

The family is devastated.  They claim that if the risks associated with vaginally delivering a breech baby had been explained to them, they would have insisted on a C-section delivery.  If resuscitation would not have been delayed for 2 minutes, they think it is likely the boy’s brain damage would be less severe. 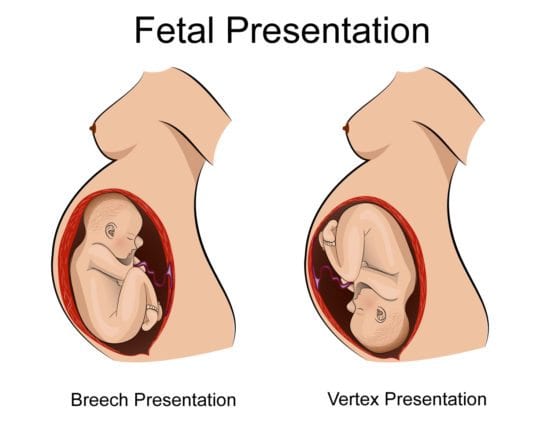 Breech babies are significantly more likely to die during a vaginal delivery compared to breech babies delivered by C-section, according to a new study.  In this study from the Netherlands, researchers reviewed more than 58,000 women who gave birth to breech babies between 1999 and 2007.  The study showed that the risk of death was 10 times greater for babies in breech presentation delivered vaginally than for breech babies who had a C-section delivery.

When breech babies are delivered vaginally, they are more likely to be injured during or after delivery than babies in the normal, head-first position.  Very serious complications can occur in breech position, such as the umbilical cord being compressed during delivery, which can cause the baby to be partially or completely cut off from her supply of oxygen-rich blood.  Umbilical cord compression can be caused by a prolapsed cord, which occurs when the cord descends in front of the baby in the birth canal, or a nuchal cord, which is when the cord is wrapped around the baby’s neck.  The umbilical cord is the baby’s lifeline.  If it becomes compressed, the baby will experience a lack of oxygen to her brain, called birth asphyxia.  Birth asphyxia can cause hypoxic ischemic encephalopathy (HIE), seizures and cerebral palsy.

A baby is also more likely to experience traumatic injury during a vaginal breech delivery.  As the baby’s head passes through the birth canal, there is an increased risk of trauma to the skull due to the head’s position.  The spine and spinal cord can also become injured if the physician does not properly position the baby during birth.  In addition, attempts to position the baby can cause brain bleeds and hemorrhages, especially if the head gets caught in the birth canal.  These traumatic injuries can cause hypoxic ischemic encephalopathy (HIE), cerebral palsy, seizures and other birth injuries.

Sometimes forceps are used to help deliver the baby’s head.  This is a risky delivery instrument that looks like a pair of salad tongs.  If the forceps are not precisely placed on the baby’s head, the head can be compressed, spinal cord injury can occur, and vessels in the brain can be torn, causing brain bleeds, hemorrhages, clots and strokes, all of which can cause cerebral palsy.

Attempting to position and deliver the baby can cause labor to be prolonged.  Prolonged labor increases the likelihood of the baby experiencing oxygen deprivation and hypoxic ischemic encephalopathy (HIE).

Most experts recommend a C-section delivery for all types of breech presentations.  However, a baby in a frank breech position, which is when her buttocks present first and her feet are both near her ears, may be delivered vaginally if the following conditions are present:

The following types of breech presentations require a C-section delivery:

A C-section delivery is often planned when a baby is in breech presentation.  However, if the fetal heart rate monitor shows that the baby is in distress at any point during pregnancy, labor or delivery – which means she is being deprived of oxygen – an emergency C-section delivery must take place to get the baby out of the unsafe conditions so the medical team can directly help her.  Failure to quickly deliver a baby in distress can cause the baby to have hypoxic ischemic encephalopathy (HIE), cerebral palsy and other birth injuries.

Delayed Resuscitation of the Newborn Can Cause Hypoxic Ischemic Encephalopathy (HIE)

The goal of neonatal resuscitation is to get the baby breathing on her own and ensure adequate blood flow throughout the body.  If the baby cannot breathe by herself, the medical team can breathe for her through a mask and bag that forces air into the baby’s lungs.  This can be done until resuscitation maneuvers are completed and the baby can be placed on a breathing machine (ventilator) if necessary.  Chest compressions are performed if the baby has an inadequate heart beat to help ensure blood flow to vital organs, such as the brain.  In addition, medications may be given to help with blood pressure, heart tone (contractility) and heart rate.  Sometimes a neonatal defibrillator must be used to shock the baby’s heart into regular rate and rhythm.

A crucial part of resuscitation is insertion of a tube, called intubation, to help the baby breathe if she is not breathing on her own.  While the tube is being inserted, the baby is not getting any air.  If the tube cannot be quickly inserted on the first attempt, the medical team must stop attempting the intubation and give the baby breaths with the bag and mask.  A baby who cannot breathe on her own will require intubation, so attempts must be made until there is proper insertion of the tube.  However, it is critical to give the baby breaths with the bag and mask frequently since prolonged insertion of the tube causes oxygen deprivation.  Intubation of a baby requires a lot of skill, so a specialist in this area should be the one performing the intubation.

A delay in resuscitation maneuvers can result in the baby being deprived of oxygen and adequate blood flow, which can cause permanent brain damage and death.  If the baby survives, she may have HIE, cerebral palsy, periventricular leukomalacia (PVL), seizures and other birth injuries.

All labor and delivery units should have a neonatal specialist trained in resuscitation immediately available.  Two minutes is too long to wait for a specialist.  Birthing units must be prepared for the rare but very serious instance in which both the mother and baby need emergent care at right after delivery.  Resuscitation of a newborn requires at least two people focusing on the baby immediately after birth, with other specialized personnel arriving within minutes.

It is imperative for physicians to properly evaluate a mother and baby in order to be aware of a breech position.  Mothers must be thoroughly informed of all risks associated with breech delivery, and continuous fetal heart rate monitoring is essential so that physicians know when the baby is in distress.  If vaginal delivery is attempted, the physician must be prepared for a prompt delivery by emergency C-section.  Every birthing facility should be equipped for immediate resuscitation of the newborn if required.  Failure to promptly deliver a distressed baby by emergency C-section and delaying essential resuscitation maneuvers can cause hypoxic ischemic encephalopathy (HIE) and cerebral palsy.

If your child was diagnosed with a birth injury, such as cerebral palsy, a seizure disorder or hypoxic ischemic encephalopathy (HIE), the award-winning Michigan HIE lawyers at ABC Law Centers can help.  We have helped children throughout the country obtain compensation for lifelong treatment, therapy and a secure future, and we give personal attention to each child and family we represent. Our nationally recognized birth injury law firm has numerous multi-million dollar verdicts and settlements that attest to our success and no fees are ever paid to our firm until we win your case.  Email or call Reiter & Walsh ABC Law Centers at 888-419-2229 for a free case evaluation.  Our firm’s award-winning Michigan hypoxic ischemic encephalopathy (HIE) lawyers are available 24 / 7 to speak with you.