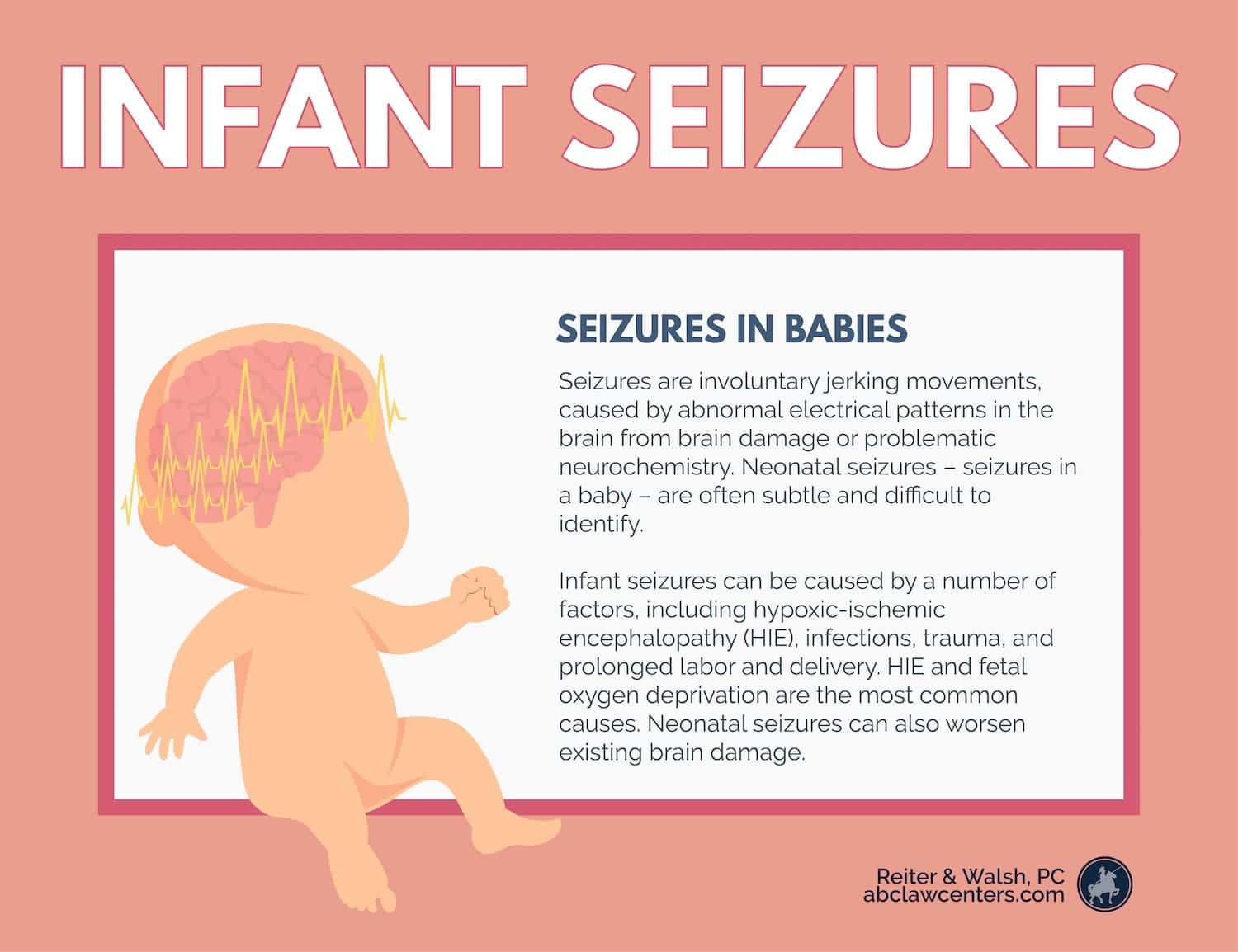 Seizure activity in an infant must be diagnosed and treated immediately because seizures can cause nerve cell injury and kill brain cells. Seizures may also adversely alter brain function in other ways like rewiring brain circuitry. The longer a seizure lasts, the more damage it does to the brain. The factors that influence how much brain damage a seizure will cause include:

Thus, the longer the seizure activity is left undiagnosed and untreated, the greater the potential for permanent damage to the baby. Brain damage caused by seizures is associated with declines in cognitive function, and newborn babies that experience seizures often are also afflicted with cerebral palsy and intellectual and developmental disabilities.

Seizures Have Many Possible Causes

When a baby shows signs of seizure activity, physicians should immediately evaluate the cause of the seizure and implement therapeutic interventions to treat the root cause of the seizures and to prevent further episodes and brain damage. In addition to treating the underlying cause, the seizure itself typically requires emergent therapy since it can adversely affect the baby’s stability. Antiepileptic drugs can be used to treat neonatal seizures.

The most common cause of a neonatal seizure is hypoxic ischemic encephalopathy (HIE), or birth asphyxia. This is a serious condition where a newborn is deprived of oxygen at or around the time of birth. Treatment of HIE includes prompt resuscitation (intervention after the baby is born to help the baby’s breathing and heart activity) and prevention of hyperthermia (elevated body temperature) and hypoglycemia (low blood sugar). Sometimes the baby may need to be placed on a ventilator to help with breathing.

Other causes of and risk factors for neonatal seizures include the following:

The combined presence of a low Apgar score (< 5 at five minutes), acidosis (pH < 7.0), and the baby having to be intubated and placed on a ventilator should alert physicians that seizure activity is likely to have occurred or will occur. Research shows that these factors have an 80% positive predictive value for clinical seizures.

If a baby has risk factors for seizures or is suspected to have seizure activity, it is critical that the physician closely monitor the baby. An EEG will likely be performed to determine if seizure activity is happening in the brain. In addition, an MRI or CT scan may be done to determine the cause of the seizures.

Failing To Diagnose Or Treat A Seizure Disorder Is Negligence

If a physician fails to pay attention to signs that a baby is having or is likely to have seizure activity, and seizures go untreated, it is negligence. If the negligence results in injury to the baby, it is medical malpractice.

If your child has a seizure disorder–with or without other neurological problems– the birth injury attorneys at ABC Law Centers (Reiter & Walsh, P.C.) can review your child’s medical records to determine whether negligence played a role in your child’s seizures. We have an exclusive focus on birth injury, providing us with the knowledge and professional experience to determine whether there was an error or negligence, and help you obtain the monetary compensation your child deserves. Contact ABC Law Centers at 888-419-2229.